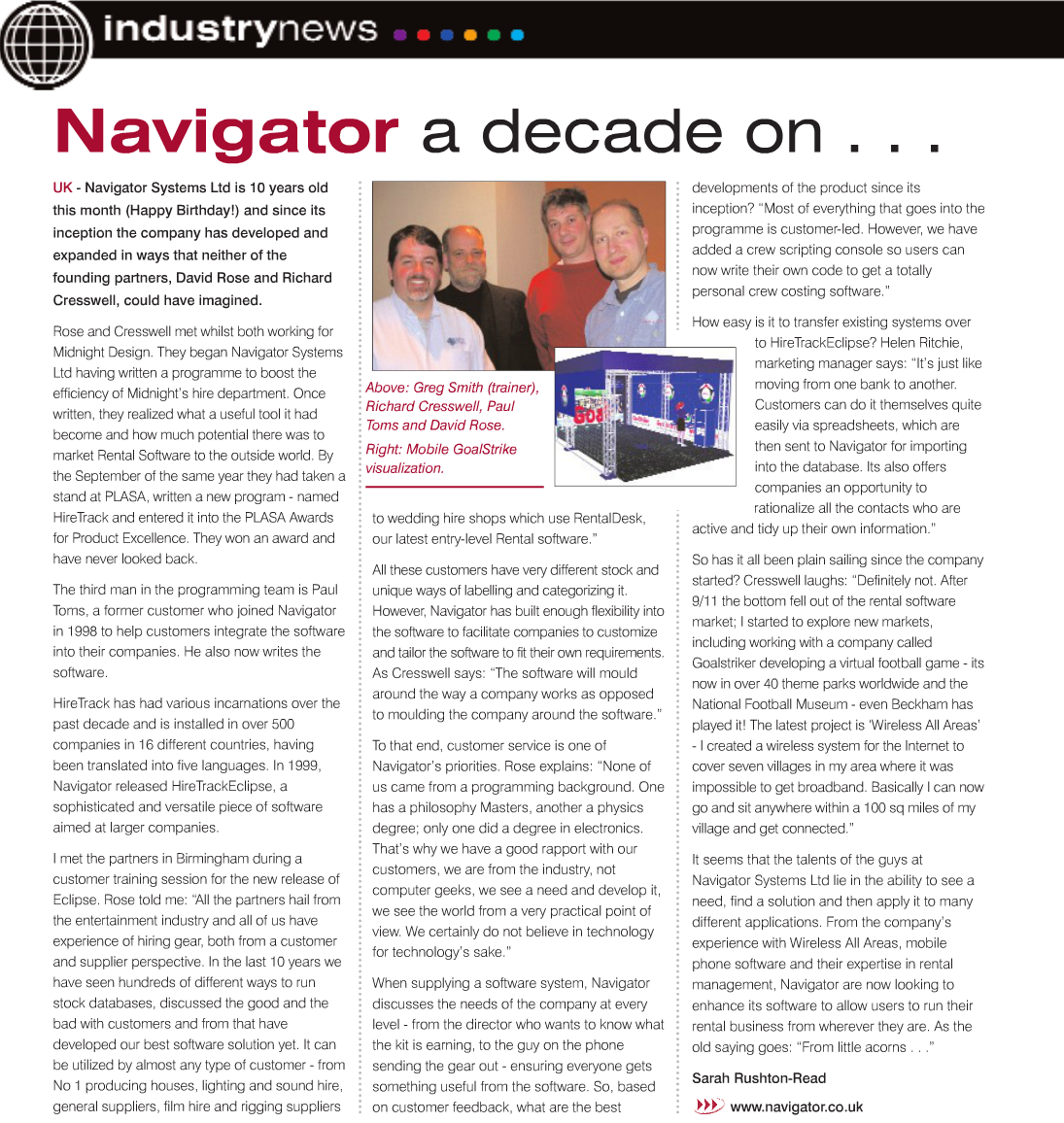 Navigator a decade on . .
UK – Navigator Systems Ltd is 10 years old this month (Happy Birthday!) and since its inception the company has developed and expanded in ways that neither of the founding partners, David Rose and Richard Cresswell, could have imagined.

Rose and Cresswell met whilst both working for Midnight Design. They began Navigator Systems Ltd having written a programme to boost the efficiency of Midnight’s hire department. Once written, they realized what a useful tool it had become and how much potential there was to market Rental Software to the outside world. By the September of the same year they had taken a stand at PLASA, written a new program – named HireTrack and entered it into the PLASA Awards for Product Excellence. They won an award and have never looked back.
The third man in the programming team is Paul Toms, a former customer who joined Navigator in 1998 to help customers integrate the software into their companies. He also now writes the software.

HireTrack has had various incarnations over the past decade and is installed in over 500 companies in 16 different countries, having been translated into five languages. In 1999, Navigator released HireTrack Eclipse, a sophisticated and versatile piece of software aimed at larger companies.
I met the partners in Birmingham during a customer training session for the new release of Eclipse. Rose told me: “All the partners hail from the entertainment industry and all of us have experience of hiring gear, both from a customer and supplier perspective. In the last 10 years we have seen hundreds of different ways to run stock databases, discussed the good and the bad with customers and from that have developed our best software solution yet. It can be utilized by almost any type of customer – from No 1 producing houses, lighting and sound hire, general suppliers, film hire and rigging suppliers to wedding hire shops which use RentalDesk, our latest entry-level Rental software.” All these customers have very different stock and unique ways of labelling and categorizing it. However, Navigator has built enough flexibility into the software to facilitate companies to customize and tailor the software to fit their own requirements. As Cresswell says: “The software will mould around the way a company works as opposed to moulding the company around the software.”
To that end, customer service is one of Navigator’s priorities. Rose explains: “None of us came from a programming background. One has a philosophy Masters, another a physics degree; only one did a degree in electronics. That’s why we have a good rapport with our customers, we are from the industry, not computer geeks, we see a need and develop it, we see the world from a very practical point of view. We certainly do not believe in technology for technology’s sake.” When supplying a software system, Navigator discusses the needs of the company at every level – from the director who wants to know what the kit is earning, to the guy on the phone sending the gear out – ensuring everyone gets something useful from the software. So, based on customer feedback, what are the best

developments of the product since its inception? “Most of everything that goes into the programme is customer-led. However, we have added a crew scripting console so users can now write their own code to get a totally personal crew costing software.” How easy is it to transfer existing systems over to HireTrack Eclipse? Helen Ritchie, marketing manager says: Its just like moving from one bank to another. Customers can do it themselves quite easily via spreadsheets, which are then sent to Navigator for importing into the database. Its also offers companies an opportunity to rationalize all the contacts who are active and tidy up their own information.” So has it all been plain sailing since the company started? Cresswell laughs: “Definitely not. After 9/11 the bottom fell out of the rental software market; I started to explore new markets, including working with a company called Goalstriker developing a virtual football game – its now in over 40 theme parks worldwide and the National Football Museum – even Beckham has played it! The latest project is ‘Wireless All Areas’ – I created a wireless system for the Internet to cover seven villages in my area where it was impossible to get broadband. Basically I can now go and sit anywhere within a 100 sq miles of my village and get connected.” It seems that the talents of the guys at Navigator Systems Ltd lie in the ability to see a need, find a solution and then apply it to many different applications. From the company’s experience with Wireless All Areas, mobile phone software and their expertise in rental management, Navigator are now looking to enhance its software to allow users to run their rental business from wherever they are. As the old saying goes: “From little acorns . . .”
Above: Greg Smith (trainer), Richard Cresswell, Paul Toms and David Rose. Right: Mobile GoalStriker visualization.